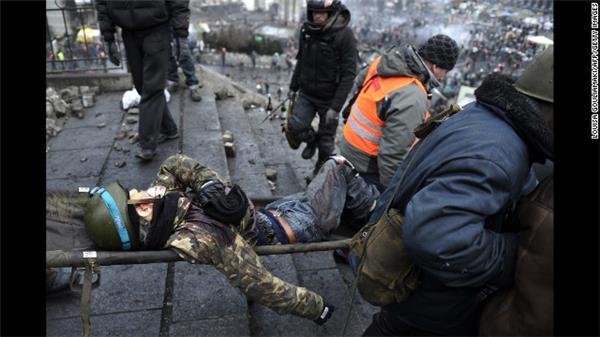 An injured demonstrator is carried away from Independence Square in Kiev on Thursday.(Photo by LOUISA GOULIAMAKI/AFP/Getty Images)
by Jason.Hanna
Ukraine's increasingly violent political crisis escalated again Thursday as gunfire erupted in the capital, Kiev, leaving at least 100 people dead, according to the head of the protesters' medical service.The violence happened at Independence Square, where anti-government protesters have gathered since November. What sparked Thursday's gunfire wasn't clear, but a CNN crew at the scene reported that some protesters -- after the government had declared a truce -- were throwing rocks and Molotov cocktails at security forces. The gunfire happened after the security forces began retreating and protesters pursued them, the CNN crew said.Meanwhile, there's been claims of sniper fire on the part of government forces. In video shot by Radio Free Europe, men wearing what appear to be government uniforms fired at unseen targets with automatic rifles and a sniper rifle with a telescopic sight. CNN could not immediately confirm their target.President Viktor Yanukovych's office said the protesters broke the truce, and accused the opposition of using the pause to "mobilize and get weapons to protesters." The violence comes at a delicate time for the government, which is under international pressure -- including threats of sanctions -- to wrap up the crisis peacefully.Check below for the latest. Also, read the full CNN.com story and this piece on what led to these demonstrations.
3rd & 7 37yd
3rd & 7 37yd
B
S
O
close
close