Tension and fears are mounting 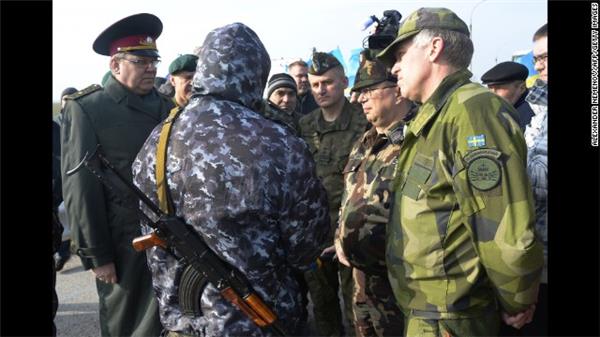 OSCE observers negotiate with an armed guard at a checkpoint heading to Crimea.
Coarse actions by pro-Russian troops in Crimea this week were followed by harsh words out of Moscow on Saturday.On Friday, pro-Russian troops reportedly tried to smash open the gates of a Ukrainian base. Russia's navy trapped Ukrainian ships. And armed men refused to allow military observers from the Organization for Security and Co-operation in Europe to enter Ukraine's Crimea region.On Saturday, Moscow chastised the OSCE. Condemn violence by demonstrators in Kiev that led to the ouster of Ukraine's former President first, the foreign ministry said, according to a report in state-run news agency RIA Novosti. Then think about Crimea."Some OSCE members and executive bodies have acted in the worst traditions of double standards while dealing with the situation in Ukraine," the ministry reportedly said.U.S. President Barack Obama has suggested a solution to the Crimea crisis to Russian President Vladimir Putin that would replace Russian troops with international monitors, who would protect ethnic Russians, should they be threatened.Russian lawmakers have welcomed Crimean separatists with open arms, and Putin has said he would use force to protect ethnic Russians in Ukraine, if needed. CNN teams are in Ukraine and Crimea as well as Moscow, Washington and other centers of power. Check below for updates of news as it breaks and read our comprehensive full story here.

And here are some other pieces that break down what is happening: